Wieters Could See MLB in '08

Share All sharing options for: Wieters Could See MLB in '08 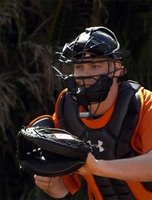 Orioles first round draft pick Matt Wieters is already drawing a lot of attention at Spring Training. Not only is he showing his natural ability to hit and throw the ball, but the way he interacts in the clubhouse shows that he belongs. "It's been a great experience so far," he said. "I'm just trying to be like a gnat on the wall, where you just fly around and listen to what everybody else is saying. And everybody's been great about talking to me, whether it's about hitting or the clubhouse. It's been a fun couple of days." In 185 games at Georgia Tech, Wieters hit .359 AVG with 35 HR and 198 RBI. Although Wieters did not play in the minor leagues last season, it would not surprise me if he got a September call up. His solid bat and average fielding make him the likely replacement for Ramon Hernandez in the future. However, there are some problems in Weiters' swing, but nothing that can't be fixed. Mainly just movement in his swing which keeps him less balanced. Also, there are not many 6'5'' catchers, and we have not seen him catch at the professional level, so if it is something he cannot handle, he might make a switch. Still, scouts say he has excellent baseball instincts and I think he will adjust fine. As for seeing time in 2008, and I think you are better off banking on 2009.