Share All sharing options for: Will Diamondbacks Trade Hudson? 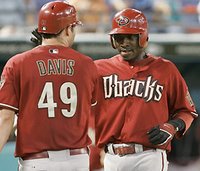 Diamondbacks second baseman Orlando Hudson is a year away from free agency and he might be traded if a contract cannot be worked out. Although I have not heard whether or not talks are ongoing, the Diamondbacks have not been ones to pay up for their players. They let Livan Hernandez walk this past offseason and with several young players in need of long term deals, they might let him walk as well and hope young second base prospect Emilio Bonifacio comes through. Also, if they want to give more time to Bonifacio they could sign someone like Mark Ellis or Luis Rivas as a one year stopgap. However, Hudson has said he wants to stay in Arizona and might be willing to take a discount that the Diamondbacks will take under their payroll: "I want to spend the rest of my career here. I love it here." As of right now, I think Hudson will stay in Arizona. But he is the best second baseman on the market and could land a huge deal if he puts together another solid season.

Bonds not going to New York: The Yankees have no plans to bring in Barry Bonds. That makes sense considering they have several big name players and very few spots left open.