Share All sharing options for: Angels's Pitchers Down, Trade Coming? 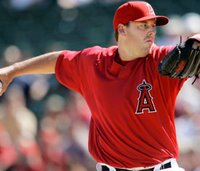 The Angels are currently entering the season without John Lackey and Kelvim Escobar, and could use a starter to stabilize the rotation. They have a lot of depth, and could trade some of it with little damage to the teams future. Buster Olney said through his blog that Joe Blanton should be considered. Billy Beane has never hesitated to trade within the division and I am sure he will approach the Angels about it before the start of the season. If Blanton could land Willits, Staitia, and a pitching prospect or two, why not do it. Although the A's and Angels play each other, the teams really have two different goals. Yes, everyone is trying to win, but the Angels are trying to win now while the A's are looking two years from now. The Angels could get a solid pitcher if only they were willing to trade some of their prospects. But as of right now, they are content with their team.