Share All sharing options for: Brian Roberts To White Sox? 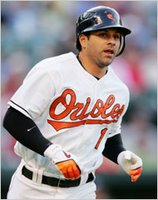 This comes as a surprise after the Cubs and Orioles have been talking about a trade for over four months now. However, Phil Rogers of the Chicago Tribune is reporting that the Orioles have been scouting Juan Uribe, and have also been spotted a few of the White Sox minor league games. The Orioles are looking for a middle infielders and adding Juan Uribe at shortstop while acquiring four or five other players might be worth it. Uribe didn't have much of an impact on the White Sox last season, but has just one year on his contract and if he can have a good year, it would probably be worth it with the four or five other players. However, it is unclear whether or not Brian Roberts would put this team over the brink. Actually, it is a certainty. The Cubs are on the brink of being a serious World Series contender, and Roberts coming over would probably put them in to the playoffs, barring any major injuries. I doubt the Orioles are looking to send Roberts to the Sox, especially if the Cubs are willing to offer better prospects. Many suspect a deal will get done by Opening Day, and I think it will also.