Cardinals Should Shut Down Pujols

Share All sharing options for: Cardinals Should Shut Down Pujols 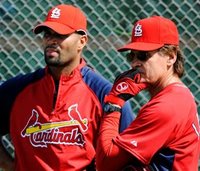 The Cardinals are off to a .500 start in Spring Training, and are probably looking at one of those kind of seasons. Albert Pujols might need to have ligament replacement surgery, meaning he would miss the whole season. Pujols obviously does not want to to do that especially with their top pitcher out, but it would be in the Cardinals best interest for him to go down now, rather than next season. The Cardinals are in no position to make the playoffs, so it makes sense that if Pujols was to go down now, he would be ready to go for the 2009 season. I'm sure the Cardinals would have no trouble trading for someone like Scott Hatteberg, who is a free agent following this season. The Cardinals should be in better shape in 2009. I expect that Colby Rasmus will be playing everyday, along with Brendan Ryan. I also think that they will go out and try and add a solid pitcher, or maybe a corner outfielder. Last season, Pujols hit .327 with 32 HR and 103 RBI in 158 games, his seventh straight season of hitting at least 32 homeruns and hitting .314.