Crede Not To Giants, But Dodgers?

Share All sharing options for: Crede Not To Giants, But Dodgers? 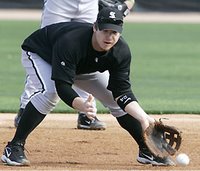 As new Giants outfielder Aaron Rowand campaigns for the Giants to acquire White Sox third baseman Joe Crede, it appears that the Dodgers might be in on it as well. According to a AL executive, the Tigers and Dodgers are having trouble coming to an agreement because there is a lot of money involved in the trade. Not only that, but the Dodgers are looking at other, cheaper options. Crede, who is entering the final year of his contract, would allow the Dodgers to play him at third this season, and then let him walk so the spot will LaRoche's in 2009. Buster Olney said through his blog that the Dodgers are hesitant to play Garciaparra regularly because of his awkward throwing mechanics. I think Crede is the better fit as well, mostly because of his low base salary and solid power, but the Dodgers might be content with going with Tony Abreu and Garciaparra to start the season.

UPDATE: DODGERS ARE SHOWING INTEREST IN RONNIE BELLIARD IN HOPES OF HIM PLAYING AS A UTILITY PLAYER, ACCORDING TO KEN ROSENTHAL.