Does Guillen Want Out?

Share All sharing options for: Does Guillen Want Out? 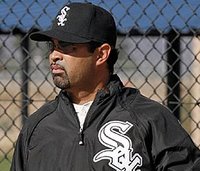 Ozzie Guillen sat down with reporters today to talk about the White Sox this season and beyond. He was disappointed by the job done last season and said that they should find someone else if he cannot get the job done: "If I'm not the answer, they have the right to do what they want to do." He went on to say, "I'm not a quitter.My point is if they think I'm not doing my job, that's different, but I'm not going to quit on my team. It's like if you're the captain of the plane and all of a sudden you say, 'I can't handle this. I'm going to crash.' And you have people you have to save. I'm not a quitter and I never will be a quitter." Guillen signed a big extension last September, but it is starting to sound like he sees the team is not improving in a division that is getting very competitive and might want to look elsewhere for a job. Kenny Williams was shocked by the comments and said that it will not happen, but we'll see how the season goes.

The problem I see with the White Sox is that they have no starting pitching. They need to go out and make a big commitment to a potential number one starter, perhaps CC Sabathia. Other possibilities include Ben Sheets, Brad Penny, and maybe even Jon Garland. Adding one of those guys would really help the squad, along with giving some of their young guys like Aaron Poreda or Jack Egbert a shot. The bullpen was fixed up pretty good this past offseason by the additions of Octavio Dotel and Scott Linebrink, so what needs to be improved is really pitching. Yes their offense is starting to age, but arrivals of Josh Fields and Alexei Ramirez should help. Also, Nick Swisher and Carlos Quentin make the team a whole lot better. I don't think this team is far from being a good team, but I think Williams needs to stress finding some quality pitching in the next offseasons to come.