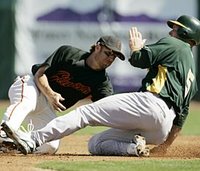 According to Ken Rosenthal, the Giants have informed several teams that they are shopping over a dozen of their major league and minor league players. Ken Rosenthal said some of the players include Ray Durham, Rich Aurilia, Randy Winn, and Steve Kline. I put in a call to the Giants and found out that Travis Ishikawa and Noah Lowry are both on that list as well. The Giants are really in a tight spot, though. They have these veterans, but they have already peaked and our on the decline. It will be hard to trade those players for a pair of prospects, so the rebuilding might have to begin when these contracts finally expire. One possible replacement next season in the infield could be Mark Ellis, but only if he is not resigned by the Athletics. Ellis is a solid defensive player who can hit 14-16 homeruns with a high average. However, he won't come cheap. I am sure he will be looking for a deal between Kaz Matsui's and Luis Castillo's. The Giants are long way from being a playoff contender, and I think the first step might be cleaning out the Front Office, and moving from there.