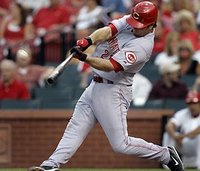 Mets first baseman Carlos Delgado is feeling some discomfort in his right hip and has been sent to New York for an MRI. They do not expect it to be serious, but because it is Spring Training, they are sending him to New York to get him checked out. However, if this is a problem that keeps coming up, they should look to bring someone in. Delgado is in the final year of his contract and it is obvious from his numbers last year, that he is on the decline. They have players that could play everyday at first base, but it makes sense to bring in someone established that could hold the position for a couple of seasons. One option is Scott Hatteberg, who is likely out of a job because of Joey Votto's impressive performance last season and early on in Spring Training. He hit .310 with 10 HR and 47 RBI in 116 games last season, and is in the final year of his contract making 1.65 million dollars. He would be a solid pick up for the Mets who could use him to platoon with Carlos Delgado. However, I talked to someone close to Omar Minaya who said Minaya is very high on prospect Michael Abreu, who they anticipate to start the season in Triple-A. I think the Mets will take a look at all their in-house options before looking to the market, but I expect Mets scouts to be all over the Reds camp.