Inge to Dodgers, A's, or Pirates?

Share All sharing options for: Inge to Dodgers, A's, or Pirates? 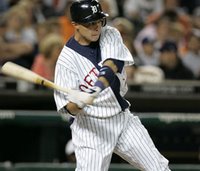 Many Tigers officials have made it clear that although it may not be in the best interest of the team, it is best for Brandon Inge to go somewhere he can play everyday. Inge, who hit .236 with 14 HR and 71 RBI, is drawing the most interest from the Dodgers. The Dodgers have Nomar Garciaparra and Andy LaRoche fighting for the starting job at third, but I think they are pretty set with going with LaRoche. The Athletics might be losing Eric Chavez for an extended amount of time and could go out and trade for Brandon Inge and have him play third until Chavez returns. Inge could then easily platoon between third, catcher, and outfield and get at least 400 at-bats. Another option is the Pirates, who currently have Jose Bautista holding the position. If the Pirates are able to trade Nady, we could see a platoon situation at third and right for both of them. One scout I talked to said that there are not many teams looking for everyday players, so Inge probably will not get traded until someone goes down. If the Rays decide to start Evan Longoria in Triple-A, similar to what the Brewers did with Ryan Braun, Inge could fill in there. I think Inge will be traded before the start of the season, possibly to the Giants, but I do not think he has a starting job waiting for him. Although I am a fan of Brandon Inge, I do not think he is worthy of a starting job. He has a career average of .241 with 15-20 homeruns a year, numbers that probably land you in a platoon role. I understand that he wants to start, but he might have to prove himself in a platoon situation before he gets an everyday job.