Share All sharing options for: Interview with Marc Kroon 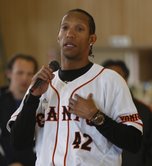 Last week, I came across the website of former MLB pitcher Marc Kroon. He has been pitching in Japan since 2005. I follow the Japanese league to some extent to know of the success of Kroon. He recently signed a deal with the Yomuiri Giants, leaving the BayStars. He was drafted in the second round of the 1991 draft by the Mets, and saw time with the Padres, Reds, and Rockies. Kroon has grown into a household name in Japan, and is now gearing up for a Championship run with the Giants. I want to thank him again for doing this interview for me, I really appreciate it. I also want to thank Mr. McCurdy for being the middle man in this process.

ELI: Did you have a favorite team growing up? Favorite Player?

MARC: My favorite team was the N.Y. Mets and my favorite player was Dwight Gooden.

ELI: What was it like getting drafted by the Mets? Did you talk with any other teams?

MARC: Well, since I was born and raised in N.Y. City it was like a dream come true for me to get drafted by the Mets. While I was in high school, almost every team has a scout at everyone of my games. I was excited the Mets choose me.

ELI: What was it like getting traded from the Mets to the Padres?

MARC: It was sad because the Mets being my favorite team, I wanted to make it to the Major Leagues with them. It was a dream of mine when I was a kid.

ELI: You retired briefly after the 2000 season. What did you do?

MARC: Well, I retired because I had Tommy John surgery and my arm never recovered. The doctors told me that I would never pitch again. I just spent time with my wife and kids. I started my own business giving children pitching lessons. It was great and I had fun doing it. When I retire, I will continue that business.

ELI: After the 2004 season, you were contacted by Japan to come play there. What were your main reasons for going?

MARC: Well, I had been playing many years in America. I was always going from the Major Leagues back to Triple-A. I got tired of it. I wanted to experience something different. So I decided to sign a one year contract with the Yokohama BayStars. I pitched well. 26 saves with a 2.70 ERA. I broke the speed record too. The old record was 158 km (98 mph). I threw 161 km (100.6 mph). The next year, I signed a two year contract. After this season, I signed a one year contract with the Yomuiri Giants.

ELI: You were very successful in your first year in Japan. Is there anyone you can credit for your success?

MARC: My wife and kids for letting come over here while they are at home. They have given me a great deal of support. I also credit the BayStars manager for giving me the opportunity to be the teams closer. Also, the fans have been great to me and have given me nothing but support since day one. I feel very comfortable here in Japan. The fans are the reason why I started my Homepage, www.kroon161.com.

ELI: Some say baseball language is pretty uniform. Was that the case when you had to communicate with players and coaches?

MARC: At first, it was difficult. But they use baseball words such as balls and strikes, outs, hits, fly ball, and strikeout. Now, I can understand all of the rest of the baseball words even if it is in Japanese because I have been here for four years. I have studied the Japanese language so I can communicate with my teammates. You would be surprised that there are many Japanese players that can speak some English.

ELI: Off the field, what is it like living in Japan?

MARC: At first, it was very difficult mainly because I do not eat any Japanese food. My first year I would ride around and check out different places. But for the past three years it has been difficult to walk outside because I have become too famous. The people love their baseball and I stand out here being 6'2. I spend a lot of time in my house reading, playing Nintendo Wii and Playstation 3.

ELI: Having played in both leagues, what would you say is the biggest difference between them?

MARC: The biggest difference I think is the speed of the game. Major leaguers are stronger and faster. But the league here is still very good. It is not an easy league by far. There are many talented Japanese players, as you saw in the World Baseball Classic.

ELI: This past offseason, you signed with the Giants. How is the free agency process different in Japan than in the States?

MARC: Well, every team is different here. Not every team gives there foreign players free agency. If you are a Japanese player, you have to play nine years before you can become a free agent.

ELI: The latest player to come over from Japan is Kosuke Fukudome. What type of the player was he and do you think he will be successful in the MLB?

MARC: I think he was the best player in Japan before he left. He hit a grand slam off me three years ago. The first grand slam I had ever given up. I wish him the best. He also is a very nice person.

ELI: You are going to be thirty-five in a week or so, do you have any goals for yourself while you are still playing baseball?

MARC: I know I am getting old. Well, I want to win a Championship before I retire. Right now, I have 84 saves career saves. I need 37 more to have the all time foreign saves record. And if I get 33 saves I would have the single-season record for the Giants.