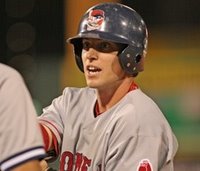 Red Sox prospect Jed Lowrie is showing a lot of potential, but is being blocked at all three positions he could potentially play. The White Sox considered trading for Julio Lugo this past off season, but talks fell through early. That would have opened a spot for him to play regularly, but now it seems his best chance of playing at the MLB level will be elsewhere. In 133 games between Double-A and Triple-A last season, Lowrie hit .298 with 13 HR and 70 RBI. I think a full year at Triple-A will do him some good hitting wise, but his above average fielding and arm strength should make him an everyday shortstop by 2009. One scout I talked to said that Lowrie won't hit for too much power, probably between 8-10 homeruns, but is very advanced when it comes to working the count and driving the ball into the gaps. He went on to say that he would solve the Nationals problem at shortstop for the next several years to come. However, they have shortstop Ian Desmond who still has some potential to be an average shortstop in the MLB. Cardinals executives are not very happy with the middle infield situation and adding someone like Lowrie, who could play second or short for the team, would solve a lot of their problems at a low cost. If Julio Lugo does well this year for the Red Sox, I suspect that they will trade Lowrie around the trade deadline, maybe for a solid minor league prospect that is being blocked in another system.