Share All sharing options for: Mets Off To Rocky Start, Lose Alou

The Mets have gotten off to a rocky start. First we come into Spring Training and find out that Orlando Hernandez is still rehabbing, then Carlos Delgado goes down. Ryan Church was then shaken up with a concussion and now Moises Alou will miss the first month of the season with a hernia. The Mets really do not have much depth on their bench so having Alou out to start the season really isn't good. Alou typically gets off to a pretty solid April and with the Braves and Phillies gearing up for a playoff run, it cannot be good. What most likely will happen is that they will play Angel Pagan in left field to open the season, which might turn out to be a good move. Not only is Pagan fast, but he has the potential to hit for a decent average. However, we could get a glimpse of Fernando Martinez, who is likely to take over in 2009 or 2010 full time.

Mets fans have been very critical of my analysis on the Mets this season, but I stand by my initial reaction that this team will not automatically make it to the playoffs. There are a lot of question marks in the rotation and also in the field. The Phillies have the best infield in baseball and their rotation is pretty solid. Also, I think the Braves have the chance to sneak in on these teams if some of their younger players live up to potential. A lot of Braves grew up and live in the Atlanta area and are close friends. I think Chemistry plays a big 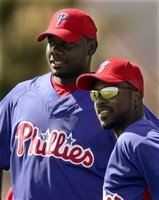 factor in winning games towards the end of the season so I am not counting these guys out just yet. I think a solid acquisition for the Mets would be someone like Daryle Ward. Ward can play first base and outfield, and he is one of the best pinch hitters in the game. Omar Minaya is already looking for a first baseman to platoon with Carlos Delgado, and he is probably going to be looking for a one year stop gap in the outfield soon too.