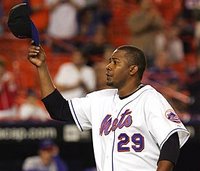 The Mets are shopping pitcher Scott Shoeneweis and Jorge Sosa, according to the New York Daily News. Shoeneweis, who went 0-2 with a 5.03 ERA in 70 games, has 7.2 million dollars left on his two year contract. Sosa, on the other hand, has just two million dollars on the final year of his contract. Sosa was similar to Shawn Chacon last season because he was used in the pen and in the rotation, and could help a team like the Pirates looking for a player to fill Chacon's former spot. Sosa was 9-8 last season with a 4.47 ERA and 69 K, but had a 0.96 ERA coming out of the bullpen. I think he would help a team like the Orioles, who just lost Troy Patton for an extended amount of time, or the Padres, who do not have much depth in their starting rotation. One reason the Mets would like to unload these two pitchers is to clear some cash, but also to make room for Rule 5 pick Steve Register, along with pitcher Mike Pelfrey. I agree with the Mets decision here, mostly because it will allow them to get younger and open up some room in their payroll. As for teams that might be interested in Shoeneweis, I could see the Reds jump in and try and make a trade. Although they have some solid pitching, he did very well in Cincinnati and could see the same kind of success like he did in 2006.