Murton Would Help Any Team

Share All sharing options for: Murton Would Help Any Team 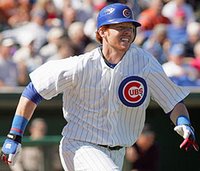 Recent reports out of Chicago suggest that Ronny Cedeno and Mike Fontenot will get to the final two roster sports, meaning outfielder Matt Murton is heading to Triple-A. Most of you know I believe Murton will be a big time player, assuming he can play everyday at the MLB level. In 195 games between 2005 and 2006, he hit .309 with 20 HR with a .375 OBP. He hit .281 with 8 HR in 94 games last season, but he should be an everyday player somewhere in 2008. There are rumors flying around that the Red Sox and Padres are the two teams most interested, and for Murton's sake, I hope a trade happens soon.

For those of you that do not know, the Cubs home schedule favors day games. There are several night games that go into day games, causing some players to become worn down by mid-May or June. Murton hit .295 during night games, but again struggled during day games. He hit very well on the road, an impressive .322, and I think he would be a very successful outfielder on a different team.

I have been calculating some projections of Murton on different teams in everyday roles, and they come out nicely. I believe he has the potential to hit .285-.295 range consistently, with 20-25 homeruns. Someone that you could compare him to is Larry Walker, before he went to Colorado. Murton's strength's are that he is very patient, has a great swing that finds the gaps, and above average speed. What would it cost a team like the Padres for Murton? Matt Antonelli or Wade LeBlanc?

Maybe this convinces you that he is a solid all around player, maybe it doesn't. Nevertheless, the Cubs are making a mistake by keeping him in Triple-A and it is hurting his chances to be an everyday player.