Share All sharing options for: News and Notes: Angels Banking On Prospects 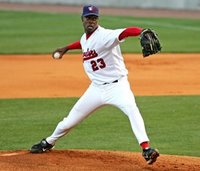 Despite losing both Jon Lackey and Kelvim Escobar till at least mid-May, the Angels will go with the guys they have, along with a minor leaguer or two. According to the LA Times, they passed on Horacio Ramirez, Jeff Weaver, and Freddy Garcia, and are prepared to go with Nick Adenhart, Dustin Moseley, or Nick Green. I saw Nick Green pitch yesterday versus the Cubs and was very impressed. He had great movement on the ball and seemed very poise. He was able to work around the Cubs big hitters, but still make outs, which is something you like to see from a young pitcher. However, that does not mean they are better than the Mariners. The Mariners made some solid improvements and they are my favorite right now because they do have solid pitching. People are overlooking the Carlos Silva signing but I think it will really pay off for them. There is still time for the Angels and if they can remain a game or so behind the Mariners coming into June, then there it will still be up in the air. Imagine your team losing it's one and two starters - it really would kills the team early on. In the Angels defense, they have some solid prospects and a lot of offense potential so I shouldn't rule them out yet, but we'll see.


Dodgers still targeting third baseman: The Dodgers are still looking for a third baseman. They have been talking to the Phillies about Wes Helms, the Tigers about Brandon Inge, and the White Sox about Joe Crede. I am pretty confident a deal will get done but the Dodgers just need to find the right pick. I hear they are not too pleased with Tony Abreu and might unload him.

Sabathia wants to stay in Cleveland: Sabathia has been with the Indians since he was 17 years old. And although he tabled discussions till the end of the season, his main goal is to stay in Cleveland. The two reasons why I think he did is one, to get his price up, and two, allow himself to only focus on baseball. When it is all said and done, I see him in Cleveland.

Varitek hoping to stay in Boston: Jason Varitek hopes the Red Sox are interested in holding onto him this coming off season. Varitek has definitely slowed down but is still a leader for the team and it hasn't gotten to a point where he is hurting them. I see him being there for at least the next two seasons.

Rays talking trades before signings: According to sources, the Rays are talking with several teams about available outfielders. The list includes Coco Crisp, Reggie Willits, Reed Johnson, Matt Murton--but I do not see a deal getting done. If they cannot sign someone, it is most likely that they will go out and sign Kenny Lofton.

Sweeney makes roster?: The Athletics are seriously considering adding Mike Sweeney to the roster after a impressive spring performance. I think he would make for a good DH, but if he can get 300 at bats off the bench, I think that will justify the signing.

Cardinals need middle infield help: Although they have a promising start in Brendan Ryan, they need someone long term to compliment him. Right now they have Adam Kennedy, who is having a pretty good spring. However, he hit .219 last season and the Cardinals nearly bought out his contract. Kennedy and Izturis are not the best combo, they need some help.

New design: Let me know what you think of the new logo and the top bar under the center ad! Also, if have not see "Syndication: MLB Rumors Elsewhere," Check it out. It is at the bottom right of the page.