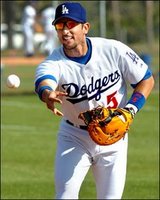 Dodgers third baseman Nomar Garciaparra has broken his right hand. He has felt pain in his hand for several weeks now and is expected to miss Opening Day. The Dodgers have already lost Andy LaRoche and are now left with Blake DeWitt and Tony Abreu to platoon at third base. "Blake DeWitt's got a hell of an opportunity to hang out with the big boys," Dodgers manager Joe Torre said Wednesday. I expect Garciaparra to be out until mid-April while LaRoche is expected to be out ill mid-May. I think they would be wise to go out and get someone, perhaps Wes Helms. Helms would be easy to acquire and would not take much to get. However, if they are serious about competing they could go out and try and acquire Joe Crede, which I think makes the most sense. The Dodgers are obviously trying to get someone from the outside and if they cannot work out a trade, they will go with Abreu and DeWitt, which is probably not a terrible combination.