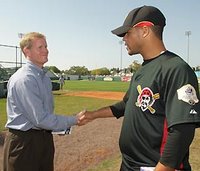 The Pirates and Ian Snell have agreed to a three year deal worth a reported 8 million dollars. However, the deal included two options that could pay him up to 16 million dollars. "It's a big accomplishment for me," Snell said at a makeshift press conference just to the side of right field at McKechnie Field. "I wanted to stay in Pittsburgh. Hopefully, it's a long stay. I want to stay and build winning seasons right now."The finally option buys out the first year of free agency for Snell so this is a good deal. His agent, Joe Scroba, was really impressed by how willing the Pirates were to get a deal done. He said it shows their willingness to win. I think we will find out how willing they are next off season. There are some big names on the free agent market next season and to see the Pirates make a long term commitment, while unloading Jason Bay, might send them in the right direction. Snell's numbers show that he would be pretty solid on a team with better run production, so hopefully he can make an adjustment to turn his numbers around. I happen to hear Neal Huntington talk to reporters down in the Winter Meetings and he is definitely very knowledgeable when it comes to baseball, lets just hope upper management will let him spend some money.