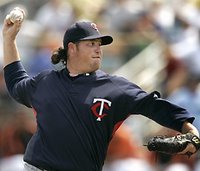 Free agent pitcher Sidney Ponson struggled to find his groove last season for the Twins, but is looking to comeback in 2008. Several teams came to look at him but the most interested appear to be the Cardinals, Diamondbacks, Mariners, and Astros. Ponson was 2-6 with a 6.93 ERA with the Twins last season, and he really has not been himself since 2003. He is 82-101 with a 4.93 in his career, but has played with four different teams since 2005. To be honest, I am sort of surprised that the Giants have place a call yet. They lost Noah Lowry yesterday for an extended amount of time and really do not have anyone to replace him. Having seen Ponson pitch, I would think he would be best off in Seattle or Arizona. Both stadiums will have solid run support, both have pretty good bullpens, and he would do well in the bottom half of their rotation. Especially in Seattle, where the stadium definitely benefits the pitcher. "I'm here to rock and roll," Ponson said afterward. "My mind is clear. My arm is good. I'm working hard. I'm in pretty good shape. I'm pretty happy with the way I threw today."