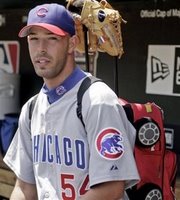 The Red Sox have three players that are out of options and are available for trade. Hard throwing David Aardsma, and pitchers Bryan Corey and Kyle Snyder. The Orioles have been eying Corey, who went 1-0 with a 1.93 ERA in 9 games last season. He has only pitched in 46 career MLB games, but has been pretty solid over that span. I think he would help a team like the Orioles who are looking to improve their roster. Kyle Snyder went 2-3 with a 3.81 ERA in 46 games last season, but hasn't seen much success elsewhere. I think Snyder would be a good bet for the Astros, who are looking for bullpen help. As for Aardsma, he is the hard throwing righty they need. He has hit 100 mph on the gun and a year working with Mike Timlin and Jon Papelbon, he could be their setup man by seasons end. However, a team like the Tigers looking for bullpen help could offer a low-level prospect or two for him. I think Justin Masterson deserves a spot in the Red Sox pen so spots are filling up fast. What seems most likely is that they will put these guys through waivers and hope they do not get claimed.