Share All sharing options for: Report: Roberts To Cubs Close 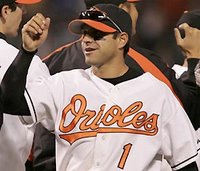 After scouts reported back to their respective teams with what they saw, the Cubs and Orioles are engaged in serious talks involving Brian Roberts. According to SI.com, the Orioles would send Brian Roberts and Jay Payton to the Cubs for pitchers Sean Marshall and Sean Gallagher, along with shortstop Ronny Cedeno and outfielder Matt Murton. Personally, I think the Orioles will ask for one more player, probably a young pitcher in Single-A or Double-A. If I had to guess, someone like Robert Hernandez or Marco Carillo are the players that could draw some interest. One problem I have this trade is what do they do with Mark DeRosa. DeRosa hit .293 with 10 HR in 149 games, and would be out of an everyday job with the acquisition of Roberts. I think the Cubs will address the situation if they do in fact acquire Roberts, so until then, it won't be addressed. DeRosa can play first, second, third, and all three outfield positions, so I still think he would see 400 at-bats, but in terms of being comfortable might be an issue. Nevertheless, Roberts would give the Cubs the leadoff hitter they need, and it would allow the Cubs to move Soriano down in the lineup. Not only that, but it would put them over the top in the division with their excess of pitching, solid lineup and bench, and minor league depth. I expect a deal to be done within the next two weeks, if not by the end of the week.