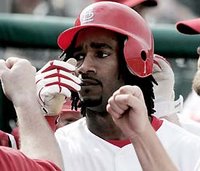 There is a lot of talk about the Rule 5 Draft picks and if they will make the squad. Several teams are in the process of figuring that out, and it looks like several of them will. Let's start with the Pirates pitcher Evan Meek, who is having a pretty solid spring. Although he might not stay with the Pirates all season, he certainly is showing what he can do. My guess is he will probably end up back in Tampa Bay. Steven Register of the Mets is earning a spot in the Mets bullpen, and it is likely he will get it if they are able to trade one of their veteran pitchers. Randor Bierd of the Orioles has been the most impressive in my opinion. The Orioles need a lot of help, and I think they will stick with him and use him sparingly. Tim Lahey of the Cubs is also having a great spring, but probably won't make the roster. Although his pitching style is perfect for Wrigley, the Cubs have a lot of bullpen depth. Some believe he will be the player to be named later in the Craig Monroe deal. R.A. Dickey is getting a lot of attention for his knuckleball, and he probably will make the Mariners. He is not much of a veteran though, having been with several teams in the last year or so. Brian Barton of the Cardinals was battling for a spot with the Cardinals against Juan Gonzalez. But now that Gonzalez is hurt, all signs point to him making the roster. He could platoon in center field to start the season with Rasmus being sent down. Finally, Fernando Hernandez of the Athletics will likely break camp. All signs point to that happening after they optioned Joey Devine to Triple-A to make room. I suspect he will be used sparingly as well. Of these guys named, who will be the next Joakim Soria? Or perhaps, Johan Santana?