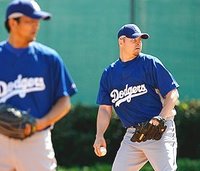 Dodgers pitcher Jason Schmidt is well behind other pitchers and has been told to stop throwing the ball, according to the Los Angeles Times. Schmidt pitched in six games last season going 1-4 with a 6.31 ERA in his first year with the Dodgers. His fastball, which used to be known for getting in the mid nineties, was barely making 87. The Dodgers planned on having him in the rotation but do have others to fill the spot if he cannot pitch. However, Esteban Loaiza is probably not the pitcher you want rounding out your rotation. Not only that, but Hiroki Kuroda is very unproven and might struggling playing in that division. Clayton Kershaw is not ready to pitch in the MLB yet and Derek Lowe is past his prime, so the Dodgers really are not in good shape this season. Yes their hitting numbers should be one of the best in the league, but if they cannot pitch, they will not win, even with Joe Torre. There are still several pitchers available to bring in, and they could extend contracts to Kyle Lohse, David Wells, or trade for Joe Blanton, which they have discussed. I think the Dodgers have the chance to be very good, but they need better pitching if they want to compete with the Diamondbacks or Padres.