Wood to be Cubs Closer?

Share All sharing options for: Wood to be Cubs Closer? 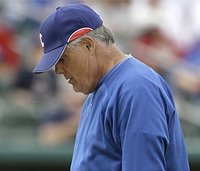 Lou Piniella has typically favored veterans, and it shows again as he is reportedly leaning towards Kerry Wood as his closer. Although I think Kerry Wood can do a good job in the bullpen, pitching everyday or five times a week is not good for his arm. We have to remember that he is still recovering from injury, and should be used sparingly. Carlos Marmol is the obvious choice for closer. He throws very hard, had one of the lowest inherited runs total, and has a solid number two pitch. Piniella favoring veterans is only hurting Marmol and will eventually hurt other players like Felix Pie. I am a big fan of Felix Pie and believe that a full year in the MLB in 2008 will allow him to get comfortable up here and prepare for a big 2009, where we will then see his full potential. Look what happened last season with Matt Murton, a year after he hit .297 with 13 HR -- he was benched and played in just 97 games. There is no place for him now, and he will probably be traded this season. The Cubs really do not need someone to platoon with Pie. They have Eric Patterson, Ronny Cedeno, and Mark DeRosa if needed, and Pie is a very good player who has shown it this spring. When Piniella let Carl Crawford go out and play, he shined, and I think he should do that with Pie.