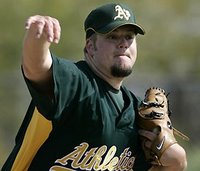 According to the San Francisco Chronicle, the Yankees have sent scouts to watch Joe Blanton. Blanton, who is off to an okay start, has been the subject of several rumors over the past couple of months. I never saw the Yankees jumping in on Blanton talks, but I am not surprised to hear it now. Although some of the younger pitchers are doing very well, I do not think Joba Chamberlain should start the season in the rotation. He has pitched in just twenty-four major league innings, so you could argue that he is very unproven. Although I think he will be a solid player in the future, giving him twenty to thirty games out of the bullpen would not be terrible for his development. Also, by acquiring Blanton, it would allow them to rotate Mussina, Kennedy, and Chamberlain in the fifth spot. The Red Sox pitching is hurting right now, and it would not surprise me if they took a look at him as well. I think if the Yankees acquired Blanton, it would make the race for the playoffs much more interesting. Both rotations have their holes, along with aging players trying to provide run support. The Yankees are hesitant to give up any prospects, so I would be surprised to see him go to the Yankees. However, if one of their pitchers faces a setback, they probably would not hesitate to make a move.