Share All sharing options for: Zito Has Tired Arm 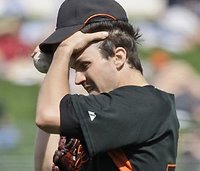 Barry Zito, known for once complementing his 12-6 curve ball with a 95 mph fastball, is now having trouble reaching 83 with his fastball. I'm not going to say that he can't be successful with an 83 mph fastball, but it is rare you see a pitcher with an 83 mph fastball that is successful. Greg Maddux is one example I can think of, but his two and three pitches have been perfected so he can use that fastball here and there. I do not see a good year in store for Barry Zito or the Giants and it will probably lead to the firing of GM Brian Sabean. I know many have readers have been saying it for awhile, and I think it is time after he has made several controversial signings over the past couple of years. It is time for the Giants to trade whatever they can for whatever prospects they can. They should be the team that takes a chance on players like Scott Thorman, Matt Murton, or Andy Marte. This should be the team for the next couple of years that goes bargain hunting for the veteran pitchers looking to bounce back. I know this is not the approach you want to see if you are a Giants fan, but this is what it takes to get back in contention. I have talked to a couple of scouts who do not see a winning season for the Giants within the next five years. I'd say it is time to make some trades.