Share All sharing options for: Zobrist, Hu, Cedeno On Market? 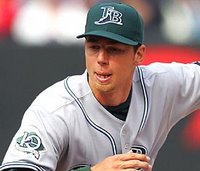 The Giants, Reds, and Orioles are in desperate need for shortstops and are looking around the Spring Training camps to find a replacement. Let's start with the Giants, who recently lost Omar Vizquel. I doubt they would trade for Chin-Lung Hu of the Dodgers, but it is possible they would go after Rays shortstop Ben Zobrist, who lost his job to Jason Bartlett. Zobrist has a pretty solid minor league track record, but has yet to prove himself at the major league record. However, he is very fast and a switch to a slightly easier division might do him well. He is still developing, and one scout told me has the potential to hit .270-.280. If he were traded to the Giants, the scout went on to say it would take someone like Pat Misch, or slightly better.

Reds shortstop Alex Gonzalez has a slight knee fracture and is expected to be out for at least a month. These injuries do take time, and I would say he should be ready to play everyday by mid-April, barring a major setback. At this point, it just seems like he needs to keep pressure off it. Then it will take time to get back in shape. I think the Reds will go with Jeff Keppinger for the time being, mostly because he hit .332 with 5 HR in 67 games last season, but we could see a trade. I doubt they would trade for young shortstop Chin-Lung Hu, but we could see him come in if Keppinger fails to repeat on his numbers. I think Hu is a better candidate to wind up in Minnesota, but we'll see. If Gonzalez does suffer a setback, we could see the Reds approach the White Sox about Juan Uribe.

Cubs shortstop Ronny Cedeno has been the subject of several trades, mostly because of his solid showing in Winter Ball. Cedeno had a very good 2005 hitting .300 in 41 games, but has struggled to make significant adjustments since then. Yet, he is pretty quick and has improved his fielding in the past two years. According to one AL GM, the Giants have discussed bringing in Cedeno as a utility infielder, but nothing seems brewing. The Orioles are currently working on a trade that would send Brian Roberts to the Cubs for at least four players, and we saw a major breakthrough in trade talks today. According to ESPN 1000 in Chicago, Orioles owner Peter Angelos gave Andy McPhail the green light to make a trade. It is believed that Sean Gallagher, Ronny Cedeno, and at least two other players will be in a deal for Roberts.

Let me know who you think is most likely to be traded.