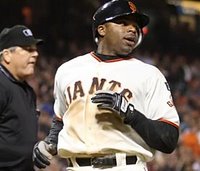 The Oakland A's claimed outfielder Rajai Davis off waivers today from the San Francisco Giants. In order to make room for Davis, the A's designated Kirk Saarloos for assignment. This is a great pick up on the A's part, who add a speedy outfielder who has the potential to hit for a modest average: "He plays left, center and right," A's manager Bob Geren said. "He's a good runner. Having a speed guy is something that's a nice addition." The A's have several outfield prospects though, so if Davis proves to not have much impact, they could trade him for a low level prospect.

Saarloos, had a rough year last season but was pretty good in previous years. Geren would like to keep him in the system if needed, and I think that is a smart choice. Saarloos will go out and give you a solid inning, it is when he gets stretched into two or three that he struggles. I think the A's will be able to hold on to him without much problems.