Are The Orioles For Real?

Share All sharing options for: Are The Orioles For Real? 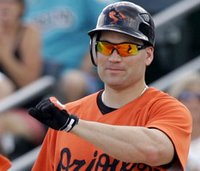 The Orioles currently have the best record in baseball and the team is starting to realize that it does not always take talent to win. The bullpen they went out to build in the 2006 off season is finally living up to its expectation, with an ERA of 0.74. The corner infielders, despite their age, have held up thus far and the team has only made two errors. Their leadoff hitter, Brian Roberts, is hitting .333 and their power hitters, Kevin Millar and Luke Scott, are both driving in runs. I talked with Orioles pitcher Rocky Cherry, who said he was surprised by how many hard throwing pitchers they had in Spring Training and said that they will surprise everyone this season.

Maybe he is right, but it is still early. Their closer, George Sherrill, has never been a full time closer. Their ace, Jeremy Guthrie, has just seven wins while the rest of the pitching staff combined has 62 (excluding Steve Trachsel, who has 142). The Yankees and Red Sox have the experience to make a run, and I am sure they will come out of their funks. However, they are both getting older, so maybe it is the Orioles turn. But the Blue Jays are young and they finally realize they can beat out the two. Again it is early, but this could be a surprise year in the AL East.