Astros Oswalt In For Change

Share All sharing options for: Astros Oswalt In For Change 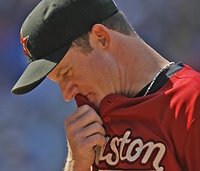 Since making his major league debut in 2001, Oswalt has compiled a 112-56 record, making him the winningest pitcher of the 21st century. Not only that, but he has pitched on three All Star teams, and has pitched in the World Series. At one point, there was not another pitcher you would want on Fantasy team than him. Oswalt is known as a power pitcher, with a devastating curveball and pretty nasty changeup. However, Oswalt's first three outings along with looking at his previous stats show that he is starting to slow down. Oswalt has barely touched 90 mph on the radar gun with his fastball and has failed to find his release point with his curveball. This has caused increased hits and less strikeouts. Gennaro Filice of SI.com breaks down his stats since 2001 basically since his career has begun:

Just because he cannot overpower his opponent, doesn't mean he cannot be a successful pitcher. Several pitchers have made a successful transition from power pitcher to finesse, and there is no reason that Oswalt should not be able to as well. Because the Astros rotation heavily relies on Oswalt, it is very important that they help him move away from power and move towards finesse. If he continues to try and overpower hitters and rack up pitch counts and innings, it could lead to nagging arm problems.