Astros Oswalt To Be Traded?

Share All sharing options for: Astros Oswalt To Be Traded? 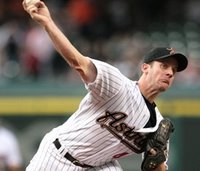 It is becoming more and more clear that the Astros will likely unload Roy Oswalt at the trade deadline. Oswalt, who has a no-trade clause, said the only three teams he would go to are the Braves, Cardinals and Red Sox. Oswalt, who is 2-3 this season with a 6.00 ERA, is on the decline if you take a close look at his stats. However, pitching for a winning team would probably help his numbers, as could a change of scenery. I doubt the Astros would trade within the division to the St. Louis Cardinals, but the Braves and Red Sox are solid options. Both teams have solid prospects that they could give up with little damage being done to the team.

In a trade with the Red Sox, which seems more likely, someone like Justin Masterson would have to be a key part of the deal. Beyond him, maybe they could pry Michael Bowden, along with a couple other low level prospects, but Jacoby Ellsbury and Clay Buchholz are definitely out of the question.

For what it is worth, Oswalt said he wouldn't be opposed to waiving his no trade clause.