Chamberlain In Bullpen, For Good?

Share All sharing options for: Chamberlain In Bullpen, For Good? 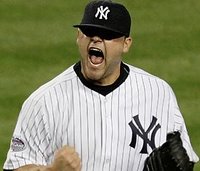 It looks as if Joba Chamberlain will be in the bullpen for the foreseeable future. Although several Front Office executives would prefer to see Joba Chamberlain in the rotation, with Brian Bruney out for the season they will keep Chamberlain as a late inning reliever. According to Buster Olney, the Yankees were looking at in-house candidates to replace Chamberlain as a late inning reliever so they could move him into the rotation. I think it is a great idea for the Yankees, but Phil Hughes and Ian Kennedy are notoriously slow starters. The Yankees have several late inning relievers, and if they are determined to move Chamberlain, I would give Jon Abaladejo a shot. He is 6-5, he has got a hard fastball, and he is off to a good start. Other than that, they could alternate between LaTroy Hawkins, Edwar Ramirez, and Kyle Farnsworth.

It's too bad that Bruney had to go down. He was off to another good start, but he is 26, so he has time to come back and help the Yankees in the future.