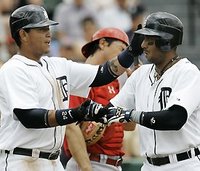 Tigers manager Jim Leyland decided to move Carlos Guillen to third base and send Miguel Cabrera to first base. This is a surprising move because the Tigers initial intention when they went out to get Edgar Renteria was to move Guillen to first to take some stress of his knees. Cabrera has no experience at first base besides the seven games this season, while Guillen's experience at third is minimal. Both Guillen and Cabrera are heating up, but you would hate to lose Guillen because of knee problems. Yes, you have Brandon Inge, but you traded two solid prospects to basically protect Guillen's knees after locking him up four more years.

Still, moving Cabrera to first might cause a jump in power numbers. When Nomar Garciaparra played first, he hit twenty homeruns. That was a jump in numbers for him, especially after hitting just seven playing a combined third and first. Leyland was unclear whether or not he thought that Cabrera could no longer play third, but he did say both players were okay with the move: "We think we’re making a move that makes our ballclub better at this time," Leyland said. "When you see things as a staff and as a manager and as a general manager and you see things that believe are the right thing to make your club better, you make the move.