Share All sharing options for: Crawford Wants Rays Extension, But... 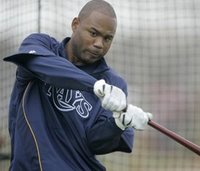 According to the St. Petersburg Times, Rays outfielder Carl Crawford is open to discussing a contract extension with the team. "Most definitely, I would like to stay here with the Rays. This is the only organization I know. I don't know nothing different. It would be nice," Crawford said. "I'd hate to leave right when the getting is good. You've been around for all the bad stuff, you want to be around for the good part, too. And it looks like the good part is coming ahead." However, it is unclear whether or not they have discussed it. Crawford is an All-Star, and is a lifetime .296 hitter with 62 HR and an OBP of .331. He gets on base a ton and rarely strikes out more than 90 times. However, I think they should watch his stats closely this season before they put a contract together, but I am sure he will ask for a deal similar to Aaron Rowand or Torii Hunter.

Personally, I think the Rays should trade Crawford. The team is just starting to get good, and should be competing in a couple seasons. They have several solid pitchers, most of them coming up within the next year or so, and hitters that could really take them into the playoffs. Imagine if they traded Crawford for four or five more top prospects. They would further restock and give them more depth for the future. The Phillies seem like a good fit. They have the prospects and seem willing to make a trade to put them over the top. Another team, the Rangers, nearly traded for Johan Santana this past off season. If they put together a lesser deal for Crawford, they might jump into contention in the AL West. The Rays could easily build a team around Crawford, but I think they would be better off trading him for youth to help them in the future.