Share All sharing options for: Cubs Place Soriano On DL 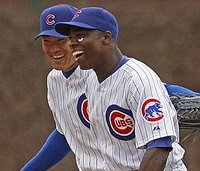 The Cubs have placed left fielder Alfonso Soriano on the DL with a right calf strain. He injured his calf doing his trademark hop to catch a fly ball. Soriano is hitting .113 with 2 HR, but started to heat up in previous games. The Cubs are paying this guy to hit for a high average, with homeruns, and stolen bases. Doing that hop after each catch is just dumb, and someone should have told him to stop. Many thought the Cubs were going to call up Matt Murton in his place; however, they called up utility man Eric Patterson. Patterson is struggling in Triple-A, but one reason that might have lead to his call up over Murton's is because they are playing his brother Corey Patterson. That probably is not the key reason, but it really does not make sense to call up Patterson over Murton. Murton should be starting on a MLB team right now, considering he hits in the .280-.290 range with 15-20 homeruns.

Patterson gives the Cubs a lead off man with speed, but he has not proven he can hit for a respectable average. I question some of Lou Piniella's decisions as a manager, especially with Felix Pie, but we'll see how this plays out for them.