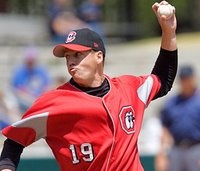 The Diamondbacks acquired pitcher Jon Coutlangus from the Reds in exchange for outfielder Daniel Perales. Coutlangus, who went 4-2 last season with a 4.39 ERA in 64 games, should help the Diamondbacks if he can develop better command over his pitches. He should make for a solid lefty in the Diamondbacks pen this season, mostly because he held lefties to a .231 batting average. For now though, he will likely be in Triple-A. As for the outfielder the Diamondbacks gave up, he hit .282 with 16 HR and an OBP of .338, but he doesn't project to be a major league outfielder. Perales is pretty solid defensively, and he could break out as a forth outfielder in the bigs somewhere. He is coming from USC, and a lot of scouts look at that differently because USC players are typically much smarter players. I would probably compare him to Reed Johnson, mostly because of his versatility and speed, but he is likely to remain a forth outfielder if he makes it to the MLB.