Share All sharing options for: Dodgers Should Let Bowa Go 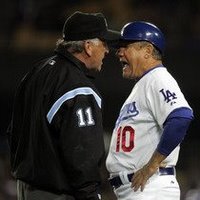 Despite bringing in Joe Torre, the Dodgers are off to a pretty rock start. The owner is not making ridiculous claims like George Steinbrenner would be in New York, but their third base coach, Larry Bowa, has been drawing a lot of negative attention. First, he called the new rule about wearing helmets on the field ridiculous; now he is saying the new rule keeping him inside the base coach lines is "ludicrous." He was ejected last night for going off on respected umpire Ed Montague for hitting the tip of his helmet on his head, and shoving Joe Torre into him. You like to see coaches defend players, but you don't like to see coaches arguing for something they could easily adjust to. I think Bowa is just finding things to argue about, and I think he should be quiet. All third base coaches just do their job quietly, and respectfully. Joe Torre should not have to be his babysitter, and if it is a problem, then they should let him go and find a new coach. I think they could find a new coach to do the job, probably better than Bowa. Yes, Bowa is a respected coach who knows a lot about the game, but there are other available coaches that would love to work under Torre. If there is another outburst within the next month or so, I think they should let him go.