Don't Judge Your Bullpen Too Quickly

Share All sharing options for: Don't Judge Your Bullpen Too Quickly 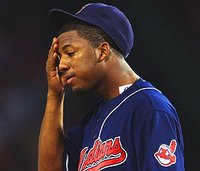 Opening Day in the United States came with several very exciting games. Mostly because bullpen's faltered, but fun nonetheless. My team lost because of the bullpen, but I can't be too upset. The bullpen is going to be rusty to start the season. Let's take a look at the Indians bullpen, who struggled in yesterday's game against the White Sox. The Indians bullpen pitched in 69.1 innings in spring training, averaging about 10 innings each. That is not nearly enough innings against live hitters to get into a groove. Not only that, but hitters will exploit that and swing at the first pitches, something that usually doesn't happen in Spring Training. Furthermore, pitchers are getting used to the much colder temperatures, after living and working out under the humid Arizona or Florida sun. The Cubs' new closer Kerry Wood struggled in his season debut, giving up three runs, but nothing was said about his poor performance. I think the Cubs should go with Carlos Marmol as their closer, but Piniella, like many Cubs fans, believe that Wood can make a successful comeback as a solid closer. He was probably nervous yesterday, but I saw little movement on his pitches, basically just a hard fastball that kept getting tagged. Of course, I think he will calm down, but I would not be surprised if Carlos Marmol is the closer by seasons end.

Despite bullpens being rusty, I am hearing that the Tigers did not like what they saw yesterday are are looking to make a trade. Buster Olney had interesting stats on his blog today showing the Tigers K/9 ratio's among relief pitchers:

Wow. Red Sox closer Jon Papelbon has a K/9 last season of 12.96. Octavio Dotel had a 11.35 K/9. Yes, these numbers do fluctuate, but it is obvious that the Tigers need to add a solid reliever. You would hate to see them trade another prospect, but that might have to happen if they want a solid reliever. I doubt Steve Kline would do the trick, whose K/9 is 6.50. Both the Red Sox and Yankees have solid relievers, maybe they could snag Edwar Ramirez of the Yankees. Another possibility would be Kevin Cameron, who was sent down by the Padres after going 2-0 in 48 games with a 2.79 ERA last season.