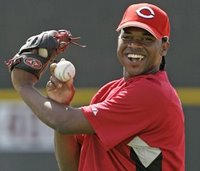 Making his big league debut, Johnny Cueto, 22, shined striking out ten and giving up one hit through seven innings. "Boy, that is some debut there," Reds manager Dusty Baker said. "The way he threw the ball today has no age to it." Cueto, who is just 5'10, was throwing the ball very hard with a lot of solid movement. "I was very confident," Cueto said through interpreter and mentor Mario Soto. "I was thinking of throwing seven shutout innings. That's what I had in mind." He threw 92 total pitches, 68 for strikes. Yes, he was able to work around one of the best lineups in the league, but the fact that he had no walks is the most impressive. New Red Francisco Cordero, who has taken him under his wing, said that they expected it from Cueto: "Cueto was so good today that people didn't notice it," Cordero said. "Not even myself. I just wanted to get my job done so he could get the win. When you pitch like that, you deserve to get a win, especially in a big league debut with that weather."

So, should you go grab Cueto in your Fantasy League? I have, for what it is worth. Many say Dusty Baker will overuse Cueto like he did with Prior and Wood, but that is false. Cueto has been controlled since they signed him, something the Cubs did not do with Prior and Wood. He will be working with veteran pitchers and will feel no pressure to be the leader of the rotation. He is in a perfect situation in Cincinnati, similar to the one Johan Santana was in when he was called up with the Twins. We may very well be in for a breakout year from Johnny Cueto.