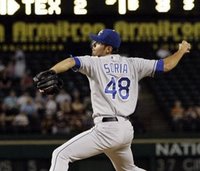 When the Royals drafted Joakim Soria from the Padres for fifty thousand dollars, who would have thought he would have turned into the closer that he is. Soria went 2-3 with a 2.48 ERA and 17 SV in 62 games, and is off to a good start this season with four saves. He has drawn comparisons to Mariano Rivera and it is not hard to see why. His stuff is nasty, and he is very deceptive for such a basic wind-up. He has the ability to paint the corners consistently with his hard fastball and can throw his fast breaking curveball on either side of the plate. He held opponents last season to a .187 AVG and lead the league in strikeouts per nine innings among relievers. Not only that, but he allowed just three homeruns in 69 innings last season. He has learned a lot from this past season, and his numbers are showing it. I'm sure the Royals will work towards locking him up, maybe even breaking Troy Tulowitzki's contract for a player under two years service time.

Several GM's I have talked to value the Rule V draft, mostly because you spend practically nothing for someone that could value your team: "More often than not, you could get a guy like George Bell. It is definitely worth the risk," Athletics GM Billy Beane said. Soria could be the next Johan Santana, but for relievers. Other notable Rule 5 picks include: Dan Uggla, who was taken from the Diamondbacks, Shane Victorino, who was taken from the Padres, and Josh Hamilton, who was taken from the Rays.