Giants Looking For Help At First

Share All sharing options for: Giants Looking For Help At First 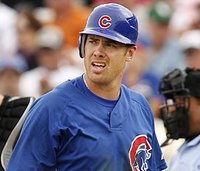 GM Brian Sabean has confirmed that the Giants are looking for a first baseman. They have had internal discussions about Nick Johnson, but will have trouble prying him from the Nationals now that he is off to a good start. The San Fransisco Chronicle says they have scouted Braves first baseman Scott Thorman, but nothing has been made of it. They do not have much interest in Dan Johnson of the Athletics, but they are looking for a lefty with some power. The Giants do not have much to offer, so they are probably going to have to take a chance on someone and hope they turn out. The Cubs' Micah Hoffpauir is being blocked by Daryle Ward, but he showed he could hit for average and power in Spring Training. However, he is twenty-eight, so you might only get a year or so from this rookie who has yet to make his major league debut.

In order to start rebuilding, the Giants need to dump their aging players, draft expensive players who will make it to the bigs fast, and make smart signings. The fact that their scouts did not see Barry Zito's K/9, K/BB, and strikeouts come down, shows that they need to clean house. The same goes with Aaron Rowand, who had a career year last year. No way is he going to hit that well in San Fransisco for the next five years. He is a reckless outfielder who averages 15-17 homeruns. I doubt they will be given the go ahead, but I think it is worth a shot to try and sign Mark Teixeira in the off season. The Giants probably do not have it their payroll to sign another big contract, though. This kind of deal I suspect will get done soon, because the Giants are off to a 1-4 start, and fans don't care to watch the Giants anymore.