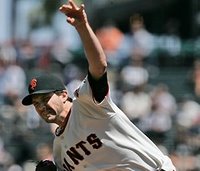 The Giants have failed to add depth via minor trades and the draft and it is starting to catch up to them. Barry Zito is 0-5 with a 5.61 ERA with only 10 strikeouts this season, and many are saying they should move him to the bullpen. Zito was never on a team with solid run support, so he always racked up in decisions leading to high loss totals. However, now that he is in San Francisco where offensive support is worse than ever, he is struggling to get wins. The six straight years of two hundred innings or more is starting to catch up to him too, and you would think they would consider moving him to the bullpen for a couple tune up stints. "No," pitching coach Dave Righetti said, "because who the hell is going to pitch? We're not that deep in starting pitching. Noah Lowry is hurting now and we're not that deep in Triple-A. We need (Zito) to pitch."

The Giants should consider adding free agent pitcher David Wells. He had a pretty good season last year and adding him would allow the Giants to send one of their struggling pitchers to the pen. GM Brian Sabean appears lost in the Front Office, and a change up there appears imminent.