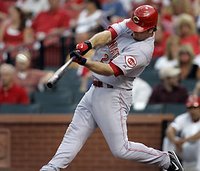 Reds backup first baseman Scott Hatteberg told reporters recently that he would welcome a trade, saying it is difficult to be a a pinch hitter: "It's difficult," he said. "I've never been a very good pinch-hitter. I'm trying to figure it out. I'm trying." Back on March 1st, I brought up the idea of the Mets trading for Hatteberg to platoon with the then injured Carlos Delgado. Although Delgado had two homeruns last night, he is still hitting .205. Hatteberg is a .273 hitting and has averaged 10-13 homeruns over the past several seasons. Getting time as a regular starter, he could probably help out the Mets or another team in need of help. The Pirates need some help with LaRoche hitting under .200. Reds GM Walt Jocketty said there isn't much interest right now, but he would be open to discussing a trade.