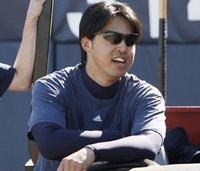 Last off season, the Yankees signed Kei Igawa to counter the Yankees signing of Daisuke Matsuzaka. They paid the Hanshin Tigers 26 million dollars and then paid Igawa four million annually until 2011. I didn't understand the move at the time, mostly because they had several young pitchers in their system, and there will still other pitchers on the market that they could have easily signed. Last season, Igawa went 2-3 with a 6.25 ERA in 14 games before he was sent down. In the minors, he went 6-5 with a 2.85 ERA in thirteen games. He has the potential to be a successful pitcher, but that it will take time to figure out what it will take. He had a pretty good spring, and he pitched six scoreless innings for the Yankees Triple-A team yesterday, with a fastball around 91 mph and an improved changeup and slider. If Ian Kennedy continues to struggle, they could send him to Triple-A and call up Igawa.

I believe they rushed Kennedy as it is, so to give him time to get his confidence up and work on his mechanics might help him and the Yankees in the long run. I think they would like to see Igawa in one more start before they call him up, but they might call him up sooner because they are paying him four million dollars, so they might as well get there money's worth.