Share All sharing options for: Interview with Frank Wren 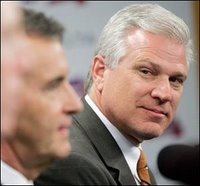 Last week, I had the pleasure to interview Braves GM Frank Wren. Wren, who got his career started in Montreal, was a key part in the Marlins front office to get them their first World Series. He has been working in Atlanta for nearly eight years, and is now the GM of the best teams in baseball. I want to thank him for doing this interview for me, I really appreciate it.

ELI: When did you get started in baseball and what would you say was your area of expertise?

FRANK: I started out in the fall of 1985, so my first season was 1986. I had been in player development, but it wasn't new to me. Scouting reports, watching players, making evaluations -- I had been familiar.

ELI: So, who was the first guy you signed?

FRANK: The first guy I signed was named Gene Harris, a pitcher.

ELI: Would you say people learn quick when working in a Front Office?

FRANK: Yeah, but it depends on the role. If you are going to be evaluating players, you have to have knowledge of the game -- how to play the game at the high levels. You need to have the eye for talent. But, this is a slow process. You do not become a star over night like you can playing baseball. You have to build up a library, and go from there.

ELI: What were your main reasons for leaving the Expos with Dave Dombrowski and joining the new expansion team, the Marlins?

FRANK: I would say there were three reasons. One, my relationship with Dave [Dombrowski]. I had been working with him for three or four years. Two, I was living in South Florida. I was thirty miles north of the stadium, so it was easy family wise. Third, it was an expansion team, and I thought it would be cool to be a part of that. I had an option to go to the Rockies as well, but I chose to join the Marlins.

ELI: Looking back at the 1997 Marlins, were they more deep in pitching or hitting?

FRANK: That was an outstanding team, probably one of the best teams of the last twenty years. But the team wasn't together long enough. Some of the players on that team are good players today. The pitching was just unbelievable.

ELI: Having seen Edgar Renteria with the 1997 Marlins, how has he grown as a player after watching him with the Braves?

FRANK: I have known him from the beginning. Me and Dave [Dombrowski] signed him when he was sixteen years old out of Colombia. He was just a rookie with the '97 Marlins -- now he is a seasoned vet who knows how to be a leader on the field.

ELI: Was it hard to trade him to the Tigers last offseason?

FRANK: No. It was easier to make that phone call because I knew him for so long and knew that he was going to be with Dave [Dombrowski] and his former manger Jim Leyland with the Marlins.

ELI: Who was the best player you got in return from the fire sale of the 1998 Marlins?

FRANK: Probably Derek Lee, he has tremendous amounts of talent.

ELI: Joining the Braves in 2000, was it hard to figure out their philosophy and where they wanted to take the team?

FRANK: It was somewhat similar. It probably takes a year though to understand what's going on. You have to figure out their off season rhythm, how they like to operate -- it probably took a full season.

FRANK: No question, there was a leadership void in Baltimore. That was definitely difficult. It was clear to me that John [Schuerholz] thought that was important. Baseball in Atlanta is baseball the way it should be, from top to bottom.

ELI: Who makes the decision on who gets called up and who doesn't?

FRANK: It is a combined effort. The front office guys might have a stronger opinion if we have heard from scouts about a guy. But if there was a guy in Spring Training that Bobby [Cox] was around and liked, we will let him make the call.

ELI: What was it like to see John Smoltz get his 3,000 strikeout, having known him for long?

FRANK: Being in the same division [Marlins], I have been able to watch him his whole career. It is great for John, obviously a special moment. It was a fun night, for everyone.

ELI: What advice would you give to an aspiring Front Office executive?

FRANK: You have to have love for the game, and the work ethic that separates you. Right now, there are so many great universities that have courses involved in Sports Business, so this career is drawing lots of interest. This is a great profession, but exclusive. You have to industrious, not aggressive.