Share All sharing options for: Interview with Jim Bowden 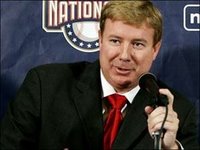 For over the past couple of months, I have been trying to set up an interview with Nationals GM Jim Bowden. His career in the Front Office is really interesting, and I wanted to know about it first hand. I put in a call to him last week, but because of phone problems, we were not able to get it done. However, working with several Nationals executives, we were able to get it done through email. I want to thank Jim Bowden and everyone in the Nationals Front Office who helped me get this done, I really appreciate it.

ELI: When you entered baseball in 1984, did you set any goals for yourself?

JIM: When I first began working in baseball, I had aspirations of winning a World Series, being the youngest GM in baseball history and winning Executive of the Year. I was fortunate to accomplish all three: 1990 [World Series], 1992 [GM] and 1999 [Executive of the Year]. I think it's very important for anyone who is entering their career, whether it be in baseball or another field, to set the bar high and work hard to surpass even their most-ambitious expectations. My goal now is to be the GM when the Nationals win their first World Championship.

ELI: What did it mean to you to be asked to be the GM of the Reds?


JIM: I was named General Manager of the Reds in 1992, at the age of 31. I was obviously honored and very excited about the opportunity. I was very fortunate during my early years in baseball to have a great group of mentors.

ELI: When in scouting, you must be able to compare players potential to a past player. What is something you look for in a pitcher before you really get serious about signing, drafting, or trading for him?


JIM: There are a lot of factors we look at, when scouting a pitcher: delivery, arm action, command in and out of the strike zone, quality of pitches, makeup, character and intelligence. We have some of the best talent evaluators in the game, led by Mike Rizzo, Bob Boone and Dana
Brown. I have a lot of confidence in our scouting department, and it has done a great job recently in beginning the process of stocking our farm system.

ELI: How much time goes in to an arbitration case or a free agent contract on your end?


JIM: We put a lot of time in to every personnel and signing decision we make. We examine all the numbers and every possible angle. Our baseball ops team here with that Nationals does a great job of making sure we are always prepared. Twenty-four hours a day, seven days a week is not an exaggeration.

ELI: Looking at your trade history, you are a very active GM. Do you think that is how you build a team with a smaller payroll compared to teams like the Yankees or Red Sox?


JIM: I think one of the great nuances of this game is that each GM can build their organization whichever way they see best within their respective financial parameters. Teams have different resources and philosophies, and they have the opportunity to find their 'winning
formula.' The best way is to scout, sign and develop your own players, either through the draft or international signings. Trades are the next-best method to improve, while free agent signings should be a last resort. All three are needed to succeed.

ELI: Having known Ken Griffey Jr. for such a long time, can you describe how you are feeling now that he is closing in on 600 homeruns?


JIM: I'm happy for Ken, he's a special person and a tremendous talent. My trade for him will always be a highlight of my trading career.

ELI: You made a couple key trades this past off season acquiring Lastings Milledge and Elijah Dukes, to start. How have they jelled with the team and in a new environment?


JIM: Both Lastings and Elijah are getting acclimated to our club. We look forward to watching their opportunities to develop into successful Major League players.

ELI: The new stadium looks great. What are the players and fans saying about it?


JIM: We are getting rave reviews.