Share All sharing options for: Interview with Josh Byrnes 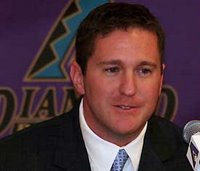 Yesterday, I had the opportunity to conduct my second interview with Arizona Diamondbacks GM Josh Byrnes. I talked with him before the start of Spring Training and he was happy to do another interview. The Diamondbacks are off to a hot start this season, lead mostly by rookie outfielder Justin Upton and pitcher Brandon Webb, but they are getting solid support from just about everyone on the team right now. I want to thank Mr. Byrnes for donating his time to me with this interview, especially around draft time, I really appreciate it.

ELI: When did you realize you wanted to get into baseball?

JOSH: I always liked baseball, but I didn't know what it entailed. Probably around high school though.

ELI: When you got into baseball in 1994, what would you say was your area of expertise?

JOSH: Probably a willingness to work hard. I knew I had a lot to learn, and was lucky to be in a open organization. I had a lot of meaningful stuff passed on to me: market analysis, arbitration, multi-year contracts, interacting with players, etc.

ELI: Staying in the year 1994, did you have an ultimate goal when you started working for the Indians?

JOSH: I had aspirations to be a GM, but I was not sure what it entailed. Guys in the Indians organization like Dan O'Dowd were very inclusive though, and I learned a lot from him.

ELI: What is the Front Office environment like? Do people learn fast, or are GMs typically the guys that naturally understand the game?

JOSH: Yeah, but there is usually a group of people in on each discussion. Each decision is framed by some level of debate.

ELI: You told me in our last interview that you were going to focus on pitching in the off season, do you feel any personal satisfaction knowing you accomplished that goal in acquiring Dan Haren?

JOSH: I think it is more organizational satisfaction. We had a good 2007, thanks mostly to pitching. Thinking about our division, we needed to add another pitcher to compete in 2008-and he was our number one goal.

ELI: Jarrod Parker is off to a good start this season, where do you envision him fitting in with the Diamondbacks?

JOSH: We view him as a starter, and will continue to develop him as one. He is a great kid though, great athlete, and has a sound delivery with good secondary pitches. Right now, the biggest thing is trying to get him used to the work load.

ELI: Numbers wise, Justin Upton struggled last season. What did you see from him last season that show that his fast start this season isn't just a fluke?

JOSH: He has tremendous talent. He came up last year at nineteen years old, just tremendous. He's got good tools too, we wouldn't have been so aggressive with Justin if he didn't.

ELI: This team has a little bit of everything. Is there anything you would like to improve over the course of this season or for next season?

JOSH: You hate to worry, but you have to. It has to be pitching. Any attempt we have to bolster are pitching, we'll take a look.

ELI: The draft pool is as deep as last years, have you started meeting with your staff about players you will look at?

JOSH: Yeah, our guys are working hard. We are having more daily discussions. It is a pretty deep draft, I'm looking forward to seeing who we take.

ELI: Is there a Diamondbacks academy in the Dominican Republic? If so, what types of things do you try to develop and instill in those players?

JOSH: It is organization philosophy just to get the guys used to professional ball environment-teaching them the rigors of the game.

ELI: What advice would you give to an aspiring front office executive?

JOSH: There is no substitute to fun, passion, and hardwork. With the Internet era, theories are discussed. But it is a learning process, you work hard.