Share All sharing options for: Interview with Peter Kozma 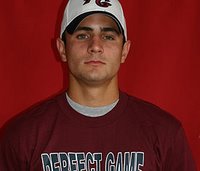 This afternoon, I had the opportunity to talk with Cardinals prospect Peter Kozma. Kozma was taken 19th overall in the 2007 draft, and it surprised almost everyone, including Kozma. However, everyone who scouted Kozma said there was something about him that makes him a first rounder: "The one thing that stuck out in my mind about Pete is you look in his eyes and you see a kid that you really feel is going to play in the big leagues," said Steve Gossett, who scouted Kozma. "He's got a look that you don't see in many guys." Kozma was pretty soft spoken, but there was no doubt he knows how to play the game right. I want to thank him again for doing this interview for me, I really appreciate it. I also want to thank Ben Chiswick, the Director of Media Relations for Quad City River Bandits for setting this interview up for me, I really appreciate it.

ELI: When did you realize you had the opportunity to play major league baseball?

PETER: I have been playing baseball since I was a kid. In high school though, I was motivated to turn the page and take my game to the next level.

ELI: What did you try to work on most in high school?

PETER: In high school, coaches stress fundamentals. I just went out there and made the easy plays-went back to the basics.

ELI: What was the draft experience like for you?

PETER: Interesting. I wasn't talking to too many teams so I was not sure what to expect.

ELI: You talked to the Cardinals, I assume.

PETER: No, not even them. I was really surprised to hear they took me.

ELI: What was your first year like at the professional level?

ELI: Most of the guys down there are new to the game. Who would you say is the leader in the clubhouse?

PETER: Probably are hitting coach, Joe Kruzel. He talks us up a lot. He is always the first one at the field.

ELI: Would do you do to shake off a bad game?

ELI: What advice would you give to young baseball players hoping to make it to the major leagues?

PETER: Work hard. [Pause] Work hard. A lot of kids stop working in high school, I would say working hard is the most important thing.