Share All sharing options for: Interview with Travis Snider 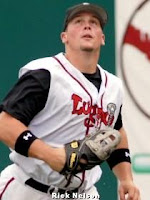 This afternoon, I had the opportunity to talk with Blue Jays top prospect Travis Snider. Snider, who is currently at Double-A, was taken fourteenth overall in the 2006 MLB draft. Since then, he has climbed the ranks of the Blue Jays minor league system and could see time at the MLB level this season. I was overwhelmed by his willingness to answer all my questions thoroughly, and I wish him all the best. I want to thank him, along with Mike Murphy of the Fisher Cats for setting this interview up for me, I really appreciate it.

ELI: You played for the Seattle Stars. What was that like playing at the national level at such an early age?

TRAVIS: First of all, it was a great experience. It was a very competitive league, I got to play with my best friends, and play for a winning team most of my childhood. To be able to compete against the best in the nation, it showed us where we stood. It definitely helped my game. Playing in front of large crowds is not overwhelming, learning how to play for something instead of just playing to play-all those things were important in molding me into a good player.

ELI: You played football in high school as well. What were your main reasons for choosing baseball?

TRAVIS: Injury. I broke my leg during a scrimmage and that caused me to miss my whole sophomore season and my whole season with the Stars. I loved football, but baseball is my number one sport. I was talking to colleges, professional teams-I had to make a decision. There was a lot of risk involved to, but I had to give up the dream of being a two sport athlete.

ELI: When did you realize you had to turn the page and take your game to the next level?

TRAVIS: I had a great showing in spring league and a solid high school season and started to realize that this was becoming more than something fun. It has always been a dream of mine, but it finally started to come a reality.

ELI: What was the draft experience like for you, being taken in the first round in 2006?

TRAVIS: The experience was great. It was like having twenty-six interviews with twenty-six different companies. I was talking with college recruiters, professional scouts, everyone. But they did not just want to know about what kind of player I was, they wanted to know what kind of person I was. Being taken fourteenth overall was exciting for me and my teammates. We finished the season undefeated, won the State Championship. Even though 'the Circus was in town,' I wasn't distracted, it was a great experience. I was very fortunate. It was a positive note to end my amateur career on.

ELI: You signed quickly and did fairly well down in the minors. What did that mean to you to get down there and see success?

TRAVIS: Well, I wasn't playing baseball for about a month between high school and professional ball, so there was an adjustment period. I was not comfortable, I was striking out a lot, but it started to turn around. I was playing in Pulaski, Virgina, which is a pretty desolate town, so that was an experience in itself, but I had great teammate and coaches who helped me a long the way. My hard work got me comfortable up there and got me to the place I wanted to be by seasons end.

ELI: What was Spring Training like at the big league camp this past March?

TRAVIS: It was the ultimate experience. I went in with the right attitude, I knew that I didn't have much of a chance of making the team. I tried to take in as much as possible. Guys like Vernon Wells, Frank Thomas, Alex Rios are actually really approachable guys once you earn their respect. I came in and tried not to get labeled as the stereotypical cocky first rounder who thinks he is better than everyone. I kept my mouth shut, ears open. It was the ultimate, ultimate experience and I will remember it for the rest of my life.

ELI: Getting to the higher levels when teams rely heavily on game tape to gather there scouting report, what do you look for when watching it?

TRAVIS: When looking at opposing pitchers, you see if they are a sinker-slider pitcher or a power-power pitcher. You find what their go to pitch is, how they pitch lefty batters, how they pitch righty batters, in what counts do they go to their fastball. One thing you have to adjust to at Double-A is when you are at the lower levels some guys will rear back and just throw their fastball in almost every count-they don't do that here.

ELI: Have you set any goals for yourself for this season?

TRAVIS: It is hard to say, I am just twenty years old down in Double-A. I just want to put together a good year, see positive results.

ELI: Going back to March, how did your college bracket do?

TRAVIS: [Laughs] Not so good. It was bust. I relied heavily on Clemson. I wasn't taking it too seriously, but I watched ESPN a couple times before my bracket was due so I had some idea. It is really a crap shoot though. The best team never wins. It was all number one seeds in the final four, I lost it by trying to find the right upset.