Is Corey Patterson Ready To Breakout?

Share All sharing options for: Is Corey Patterson Ready To Breakout? 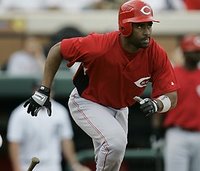 Reds outfielder Corey Patterson is off to a decent start, showing signs of power and patience. Many credit Dusty Baker for handing him the starting job, but I also think it is because he is familiar with the National League. He has hit two homeruns in the past three days and has driven in three, giving the Reds two wins out of three. I wouldn't say it is only him, but he is definitely a key part of the offense. The Reds have several young players that could take them into the playoffs, but probably not this year. Edwin Encarnacion, Joey Votto, and Jay Bruce, along with pitchers Homer Bailey, Edinson Volquez, and Johnny Cueto make this team a threat for the future.

Will Patterson hit .300 with 20 HR like many thought he would when the Cubs drafted him? Probably not, but putting up a .270 batting average with 15 homeruns and 30-40 SB is likely, and would help this team a lot. Patterson could take over in right field for the Reds if Ken Griffey Jr. cannot continue to play in the outfield in 2009, or is traded back to the Mariners like some expect. However, Patterson could be like Kenny Lofton in 2007 and be traded at the deadline to a playoff contender. But, let's not jump the gun, we are only in the first week of the season. He will likely finish the season with the Reds platooning with Jay Bruce and Ken Griffey Jr.